The Study of Neuropharmacological Actions on GABA, Dopamine and Serotonin Receptors 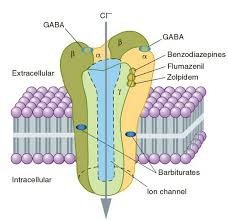 Neuropharmacology is the study of drugs that affect the nervous system it focuses on the production of chemicals that can help people with neurological or psychiatric conditions and it is also a study of how drugs alter the cellular functions of the nervous system and the neurological mechanisms by which drugs behavior is known as neuropharmacology. The study of the effects of drugs on human behavior is central to behavioral neuropharmacology, as well as the study of drug addiction and the effects of addiction on the human brain in the study of neurons and their neurochemical interactions is called molecular neuropharmacology and aims to discover drugs that improve neural function. Both regions deal with the interaction of neurotransmitters, neuropeptides, neurohormones, neuromodulators, enzymes, second messengers, transporters, ion channels and receptor proteins in the central and peripheral nervous systems. By studying these interactions, researchers develop drugs to treat a variety of neurological problems, including pain, neurodegenerative diseases such as Parkinson's disease and Alzheimer's disease, psychiatric disorders and addiction It is a study of how human behavior and intellectual processes are transmitted from neuron to neuron and how drug affect the chemical basis of these processes, is a medicine that neuropharmacology can provide. Neurons are called excitatory cells because the surface membrane contains many proteins called ion channels that allow small charged particles to move inside and outside the cell. Neuropharmacology appeared in the field of science only in the early 20th century when scientists gained a basic understanding of how the nervous system and nerves communicate with each other. Prior to this discovery, drugs with certain effects on the nervous system were discovered. In the 1930s, French scientists began working on a compound called phenothiazine in the hope of synthesizing a drug that could fight malaria. Though this drug showed very little effect in the use against malaria infected individuals, it was found to have sedative effects along with what appeared to be beneficial effects toward patients with Parkinson`s disease. The invention of the voltage clamp technique in 1949 made it possible to study ion channels and action potentials. With these two major historical events in neuropharmacology, scientists are not only about how information is transmitted from one neuron to another, but also how that neuron transfers that information within itself.

Submit manuscript at www.walshmedicalmedia.com/submissions/clinical-experimental-pharmacology.html or send as an e-mail attachment to the clinipharma[at]medicalsci[dot]org

Benefits and Virtues of Mosses and Liverworts

Applications of Immunopharmacology in Pharmaceutical Industry